I am Certified by the U.S. Professional Tennis Association and the British Lawn Tennis Association. I was a top junior tennis player in Great Britain and gained an athletic scholarship to Louisville University and Murray State University, where I studied and received my degree in Exercise Science. I also have a two year degree in Sports Science from South Notts College in Nottingham, England. My love for the sport led me to start professionally coaching in 2005. Prior to coming to Charlotte Swim and Racquet Club, I coached at Olde Providence Racquet Club, Russell Tennis Club, and Matthews Swim and Tennis Club. Over the years I have coached a wide variety of players ranging from children as young as age 4, to adults, including several ladies league teams. I have also produced a number of college level players. The most fulfilling aspect of my job is the chance to meet others who share a love for this sport. Knowing I played a role in someone reaching their potential on court, allows me to go home each night, not only satisfied, but proud. Married 6 six years to Jennifer. 4 year old son Hudson already playing the bat and ball. 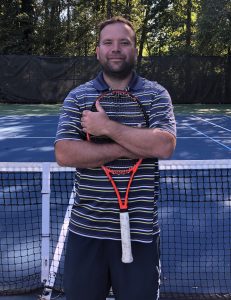 I was born and raised in Charlotte, North Carolina. I grew up playing pretty much ever sport but even from a earlier age tennis stood out to me as my favorite. In the junior rankings I was ranked as high as #1 in state, #1in the south and #6 in the nation. After my junior career was over I got a scholarship to play tennis at Clemson University were I played varsity tennis from 2007-2011. At Clemson I started all 4 years and received the MVP award in 2010. I still have a passion for tennis and making people grow to their full potential in the sport and I am very excited to be apart of the Charlotte Swim and Racquet Club family.